Rising from the ashes in the Mon Valley 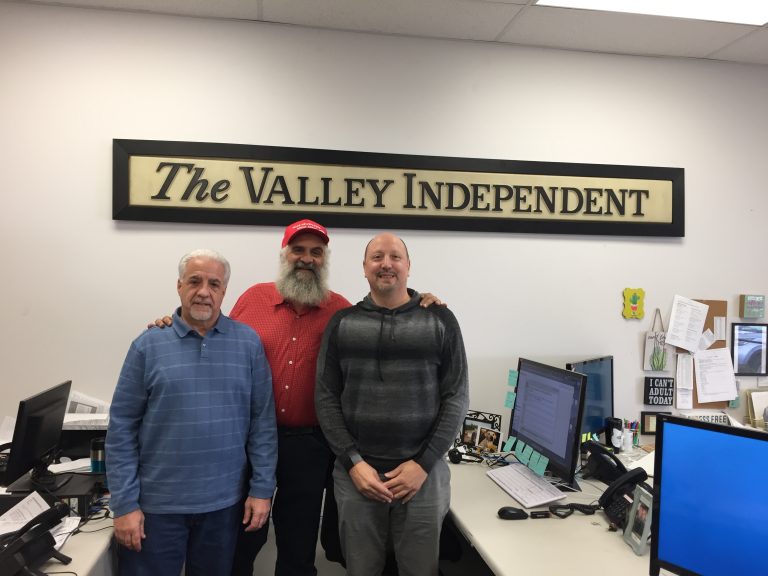 The Wheeling-Pittsburgh steel mill in Monessen closed in 1986.

The newspaper of record for this southwestern Pennsylvania town hung on another 30 years, however. But when the Valley Independent ceased operations after 113 years, many in town wondered if that signaled the end of Monessen itself.

“You can see Monessen has a lot of blight, it was hit hard by the opioid crisis,” said Naz Victoria. “If the newspaper left, no one would care about this area anymore.”

Fast forward three years, and the group is proud to say the newspaper is profitable.

It wasn’t easy. There were a lot of potholes on the road to profitability. For one, Bassi is currently in federal prison.

There were also layoffs — mostly in the managerial ranks at the paper. Those layoffs were part of the learning experiences the group had to endure when they started the new venture. As a group, the owners had no previous newspaper ownership experience. Of the four, only Victoria had worked for a newspaper, and that was as a stringer.

They said they currently print about 6,500 papers six days a week, of which about 4,500 are home delivery subscriptions. So when the former paper went away, a lot of those subscribers either went elsewhere for their news and didn’t come back, or they just decided they didn’t need a newspaper any more.

The Mon Valley is an interesting geographical mix. It is on the edges of four counties, meaning any coverage done by, say, the Pittsburgh Post-Gazette would be mixed in with their overall Allegheny County coverage, or any Mon Valley stories created by the Tribune-Review would be buried in their Westmoreland County coverage, and so on.

In order for the MVI to win back subscribers and acquire new ones, the owners have changed the way the paper does business in both the newsroom and on the advertising side. They see the paper as a tool to help rebuild the Mon Valley. What does that mean for the newsroom? That means they wanted a format of good news, especially on the front page.

“You can’t do it through bad news,” Galis said. “You’ll still find it (crime news and the like), but it’s not on the front page.”

“Things like putting the names of town where people are from in the headlines (of crime stories),” Galis said. “What does that town have to do with what this one person did?”

Victoria called it a “battle” to get the newsroom to change its philosophy.

There was a similar battle on the advertising side, where they wanted to change the way they dealt with businesses. Instead of telling businesses how much ads cost in the paper and online, “ad consultants” work with local businesses to find out what their budget is how they can get the most bang for their buck.

When the paper started, they said they had about four or five ads in print on any particular day. Now they are up to about 30 per day.

These changes did lead to turnover in the company — some voluntary and some not.

“But everybody here has bought into the philosophies,” Victoria said, “and that’s why we’re flourishing.”

Those in journalism circles around the Pittsburgh area have taken notice.

“That they went into an area where the newspaper was closing and started from scratch, and started something fresh and new, and built it out a little bit at a time is impressive to me,” said Andrew Conte, founding director of the Center for Media Innovation at Point Park University in Pittsburgh.

The MVI did its first expansion of its coverage area this year. On the editorial side, expanding its footprint deeper into the Mon Valley was relatively easy. But where they’ve found difficulty has been on the circulation side. In particular, they are having an issue actually getting the paper to those new areas they’re covering. Hiring drivers who want to work just a couple of hours six days a week is a challenge for them.

One area the MVI is still trying to figure out, like a lot of other publications, is what can be done digitally to improve the bottom line.

Digital subscriptions had been stagnant the first few years of operation, but a recent push of handing out free trial subscriptions at high school sporting events has jumpstarted their online presence.

“Digital is not an option,” Victoria said. “It’s our future. But how we do that is not clear right now.”

While the publication tries to figure out its digital future, it is focused on improving all aspects of its operation. They are discussing the possibility of creating a nonprofit, expanding coverage in more areas and getting into the events space.

“At the beginning, I thought (the paper) would be around for another 10-15 years,” Galis said “But now, I think it will be here for a couple more generations.”

Jim Iovino is the Ogden Newspapers Visiting Assistant Professor of Media Innovation in West Virginia University’s Reed College of Media and is the director of the NewStart program.[/vc_column_text][/vc_column][/vc_row][/vc_section]